Today we at myonlineca discuss about New rules for Trademark Registration in 2018. The Government of India took the action to draft a new set of rules that are in aligned with the intention of fastening the procedure of trademark filing while decreasing delays in The process. A proclamation regarding the draft rules for Trademarks was published by the Government of India in November 2015 inviting objections and suggestions from people who are likely to be affected by the said rules. Keeping in view the proposal received and objections raised, the Central Government has developed Trademark Rules 2017, thereby replacing the Trademark Rules 2002.It came into effect on 6th March 2017 and still continue in the 2018. 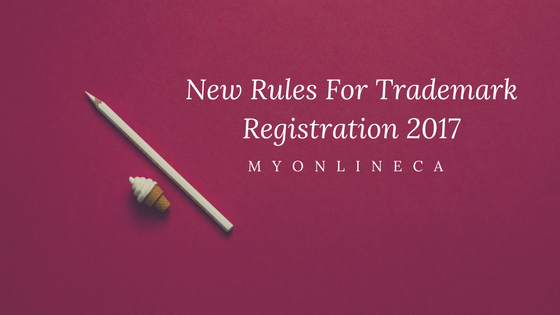 Recommend Read : How to Search about the Trademark in India

In order the achieve its ambition of simplifying the process of Trademark Registration in India, the following changes have been  made:

Rules for Trademark Registration in 2018

Reduction in the number of forms from 75 to 8

The number of forms that were used in Trademark Registration Process has been drastically reduced, simplified and unified to a total of eight forms from  75 forms that were earlier used. The use of alphabets like Form TM-A for applications and Form TM-O for opposition makes it comfortable to identify the purpose of the form as against the earlier numbering of forms. Now, all trademark applications whether single class, multi-class, collective marks etc. is done through using the same form.

A new category of applicants namely Startup, Small Enterprise, and Individual has been added and the fee that will be paid for this category is 50% lower than the fee for all the other categories. While the fee for this category is INR 5000 for physical filing, for other category is INR 10000. There will be a 10% concession on a fee for e-filings of the trademark. The lower fee for startups and small enterprises is implemented in order to provide an incentive to them to file the trademark application.

Radical increase in the Fee

The fee has been radically increased by almost 100%. There could be many cases for the same that may consist of avoiding petty filing of trademarks by people in order to take careless commercial leverage of the registered trademark.

Sound marks are made effortless to register

The procedure of registering sound marks has now become uncomplicated. The applicant of a sound mark will now have to submit an MP3 of the sound mark that has to be not more than 30 seconds in length along with a graphical representation of the sound notations. Such application has to be filed on form TM-A. Earlier, an application to file the sound mark was done by exhibiting them graphically through the notes or by spelling out the tune that was required to be filed by the applicant of the trademark.

Rule 34 of the new rules provide for quick processing of trademark registration at each stage including examination, hearing, and registration as against the earlier rules. The processing shall be made in Form TM-M only through e-filing, mentioning the reason for expediting the process. The fee for expediting the application will be 5 times the fee for filing the trademark.Application for renewal of registration of a trademark can now be filed in Form TM-R, 1 year before the expiration of the registration of the trademark. Additionally, It now becomes mandatory for an applicant to file an affidavit along with supporting evidence to claim the use of the mark which Earlier was at the discretion of the Examiner.

Electronic service of the documents

the New Rules administers for electronic service of documents including all applications, notices, statements, papers having representations or any other document.Therefore, email may be used as a channel to send the official communication by the Trademark Registry and it will be treated as a full service. The email so sent will amount to service of a document on the applicant. This will remove the need for the documents to be sent through post avoiding the unnecessary delays.

3-D marks are made registrable

This comprises trademark registration of shapes and packaging. The application for 3-D marks is filed in Form TM and it shall specifically be stated that the mark is  3-D mark.Two-dimensional graphics reproduction of the trademark will have to be furnished in three different views. In case the Registrar acknowledges that the trademark is not  3-D mark then he will instruct the applicant to furnish up to five different views of the trademark and description of words and if needed additional description, a specimen of the Trademark need to be submitted.

Hearing of the matter through Video Conferencing

In a move to expedite the process, Rule 115 provides that hearing of matters could be conducted through video conferencing or any other means of audiovisual communication. This will greatly help to reduce the inconvenience faced by applicants to be physical y present at the location, thus saving them on time, money and effort.

Rule 124 states that any person can enlist a mark as a well-known mark along with the statement of the case, evidence, and documents and a fee of INR 1 lakh. Prior to making a decision, the registrar must invite objections from the general public. The Department of Industrial Policy and Promotion shall maintain a list of well-known trademarks. This is a positive step to improve the image of India in providing protection to known trademarks.

Reduction and limitation in the number of adjournment

Rule 50 provides that during an opposition hearing, a party is not entitled to ask for more than two adjournments, thus reducing the time for taking the final decisions and hence registration of trademarks.

All these new changes in the rules regarding trademark registration In India will surely enable to easily and speedily acquire a trademark and further, it will enhance the ease of doing business in India which is a primary need of India in Order to financially and socially develop itself.