Types of Companies or Company Registration In India

In Today’s article we will discuss types of companies or Company registration in India.The meaning of the word company signifies any entity formed under the Companies Act, 2013. made up of an association of people, be they natural, legal, or a mixture of both, Created for carrying on a commercial or industrial enterprise.  so before starting any type of business you have to carefully choose the right legal entity for your business. 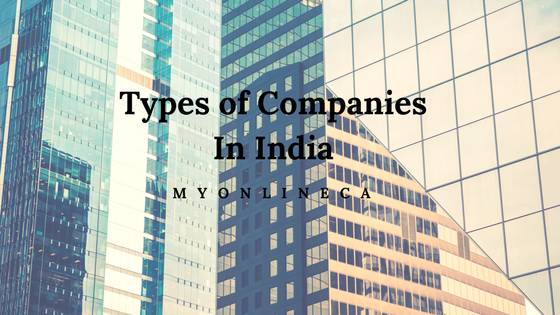 Based on the activity/requirement of the commercial activities, different types of companies in India that can be formed under the Companies Act, 2013 are as follows :

Types of Company Registration In India

It is the most common type of Private Limited Company. A company limited by shares means a company having the liability of its

members limited by the memorandum to the amount, if any, unpaid on the shares respectively held by them.

It is the type of a company having the liability of its members limited by the memorandum to such amount as the members may undertake to contribute to the assets of the company if it gets bank corrupted..

The unlimited company is a company where there is no limit on the liability of its members. This means that if the company suffers a loss and the company’s property is not enough to pay off its debts, the private property of its members is used to meet the claims of the creditors. This means that there is a huge risk in such companies. Unlimited companies are not found in India; instead, their space is occupied by the proprietary kind of businesses.

Characteristics of the private limited company:

One Person Company (OPC) is a newly introduced type of company. OPC was introduced in the Companies Act, 2013 to support entrepreneurs who on their own are capable of starting a venture by allowing them to create a single person economic entity. One of the biggest advantages of an OPC is that there can be only one member in an OPC, while a minimum of two members is required for incorporating and maintaining a Private Limited Company or a Limited Liability Partnership. Similar to a Company, an OPC is a separate legal entity from its members, offers limited liability protection to its shareholders, has continuity of business and is easy to incorporate.

It is a types of companies in India whose shares can be bought by the general public. It is Created and owned by shareholders. Shares of a public limited company are listed and traded on a stock exchange market freely.

Characteristics of a public company:

It is a form of business where a single person handles the entire business operation. He is the only person to enjoy profit and bear loss. There is no specific law that governs sole proprietorship.Proprietors of such firms have unlimited business liability. This means that owners personal assets can be attached to meet business liability claims.It is not possible to transfer the ownership of a Sole Proprietorship from one person to another.

Joint Hindu Family is a form of business organization where the business is managed and operated by family members. It is governed by Hindu Law.

The partnership is the relation between persons who have agreed to share the profits of the business carried on by all or any one of them acting for all.This type of firm is registered under Indian partnership act,1932.

I Hope by this article you might have come to know the types of companies in India that you can start. If you need any help with the company registration do check out our website today!