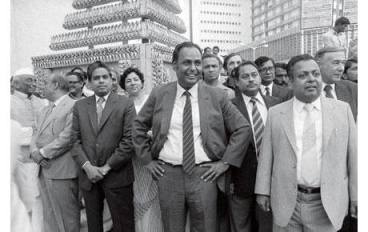 No one could have imagined then that the former student of Junagadh’s Bahadur Kanji High School, who during the sixties lived in a one-room chawl in Mumbai with his wife and children, would be ranked by Forbes as the world’s 138th-richest person, with an estimated net worth of $2.9 billion in 2002.
He was fond of quotable quotes, one of these being: “If you don’t build your dream, someone else will hire you to help them build theirs”.

There can be no better example of someone walking his talk so convincingly.

Dhirajlal Hirachand Ambani (better known as Dhirubhai), son of a school teacher in a remote village in rural Gujarat, chose to build his own spectacular dream by hiring as well as using some of the country’s most shrewd and influential minds.

But make no mistake, however shrewd or well-connected his hires or partners were, they were just bit players in the blockbuster of a megastar who dared to dream on a scale unimaginable before in Indian industry.

During his lifetime and after, Ambani aroused extreme responses in others.

While admirers attribute Ambani’s success to his financial wizardry, deep home-grown knowledge of the environment he was operating in, massive innovations in marketing and technology, and unmatched project execution skills, others say the success reflected the consummate skills with which he could win friends and influence people to pick his way through the dense jungle of controls.

These skills were critical in knowing how to bend rules or have them bent for him.

To be fair, Ambani wasn’t alone in this; his counterparts in many traditional business families also played the same game.

It was only that all of them were outwitted by a man who simply gate-crashed into their party and didn’t let his ego come in the way.

Remember his famous statement in an interview to India Today magazine that he was ‘willing to salaam anyone’ in the government as the most ‘important external environment is the Government of India’.

As the birth and history of Reliance Trading Corporation (which imported polyester and exported spices) later renamed Reliance Textiles Corporation before finally being named Reliance Industries show, both camps were spot on in their estimation of the man who returned from Aden to begin his tryst with destiny in 1958 with just Rs 50,000.

He was 26 then but had already given enough indications of his money-making abilities while first working as a petrol pump attendant and then as a clerk in an oil company.

No one, of course, could have imagined then that the former student of Junagadh’s Bahadur Kanji High School, who during the sixties lived in a one-room chawl in Mumbai with his wife and children, would be ranked by Forbes as the world’s 138th-richest person, with an estimated net worth of $2.9 billion in 2002, the year he succumbed to a vascular stroke.

This was his second stroke, the first had occurred more than 16 years earlier, leaving the right side of his body paralysed.

There are many reasons why Ambani left a deep imprint on India’s corporate history of the last 40 years, the foremost being his ability to make Reliance the finest investment proposition ever seen by the Indian investor.

At a time when participation in the Indian capital markets was largely limited to a small but influential elite, Ambani brought first-time retail investors into his then relatively unknown company by floating an initial public offer of 2.8 million equity shares of Rs 10 each at par.

The company was listed on the Bombay and Ahmedabad stock exchanges in January 1978.

The move was considered to be bold and daring but Ambani did manage to convince 58,000 middle-class investors, mostly from small towns, about his promise of a substantial return on their investments should they decide to place trust in him.

That’s a promise he kept till his last day, in the process creating one of the world’s largest shareholder families.

The adulation for him was so great that in 1986 the company’s annual shareholder meeting was attended by as many as 30,000 stockholders, a record in India’s corporate history.

No hall in Mumbai (Bombay then) could hold that number, so the meeting had to be finally held in Cross Maidan.

There was a reason for this hero worship.
Ambani made millionaires out of many of the initial investors in the Reliance stock.

By the time he passed away, Ambani had converted this fledgling enterprise into a Rs 75,000-crore (Rs 750-billion) colossus — an achievement that earned Reliance a place in the global Fortune 500 list, the first ever Indian private company to do so.

Ambani, who established his first textile mill, turning out polyester cloth under the Vimal brand name at Naroda near Ahmedabad in 1966, set up a polyester plant in the 1980s.

In the 1990s he turned aggressively toward petrochemicals, oil refining, telecommunications and financial services.

On the flip side, many say, he had to pay a heavy price in later years for remaining a hero in the eyes of ordinary shareholders.

For, he had to consistently offer them something beyond what they were already used to receiving and that became some kind of a treadmill from which he could never get off — the reason for many of the allegations, including share price manipulation, that he and his group faced constantly.

One of the many Ambani firsts was in the area of high finance that provided a big boost to the capital market.

He brought back convertible debentures after convincing the government of its legitimacy and issued six series of debentures to raise vast sums of money.

Apart from receiving a fixed rate of interest for a specific period, investors also faced the prospect of a decent capital appreciation when a part of the debentures was converted into shares.

By announcing that these debentures would be converted into equity shares at a premium, he received a record subscription of Rs 400 crore (Rs 4 billion) from the investing public in a single issue in 1985.

There were other financial innovations in capital-raising.

For example, Reliance was the first to raise money through a seven-year syndicated bullet loan in Europe and it also raised bonds in the US market, half for 20 years and half for 30 years.

Ambani also reminded everybody that project execution and management skills that compress construction and erection time were something that would never go out of fashion.

Even his first textile mill at Naroda in Gujarat way back in 1966 was praised by a technical team from the World Bank as one of the best composite textile mills in India and ‘excellent even by developed country standards’.

He probably holds a world record in setting up a 10,000 tonne polyester yarn plant in 14 months.

This passion for excellence was what enabled Reliance to set up the world’s largest grassroots refinery at the time at Jamnagar ahead of schedule in the face of formidable challenges, including a massive cyclone that flattened the project site during construction.

The cost was also 30 per cent lower than the prevailing global benchmark for a project of such magnitude.

However, Ambani never could get over this image of someone who bulldozed his corporate rivals, managed to always procure the licences he wanted and got the government of the day to set duty rates that suited him.

His corporate rivalries dragged in some of the country’s best known politicians, corporate heads and media houses.

He had to fight the law enforcement agencies on charges of smuggling in a new polyester filament yarn plant and how companies registered in the tax haven Isle of Man, with names like Crocodile Investments and Fiasco Investments, had purchased Reliance shares at one-fifth their market prices.

He was for a brief period out of favour with the powers-that-be, which led to his aborted bid to take over Larsen & Toubro (Ambani had to step down as L&T chairman) — something that he has often termed his biggest defeat.