MOA and AOA of Private Limited Company in India

If you are Indian Entrepreneurs and want to setup a Private Limited Company in India then you have to must know about the MOA and AOA of Private Limited Company in India which is one of the most important part or proedure to incorporate a private limited company. so today here we discuss about the Important of the Memorandum of Association(MOA) and Article of Association(AOA) in a Company. 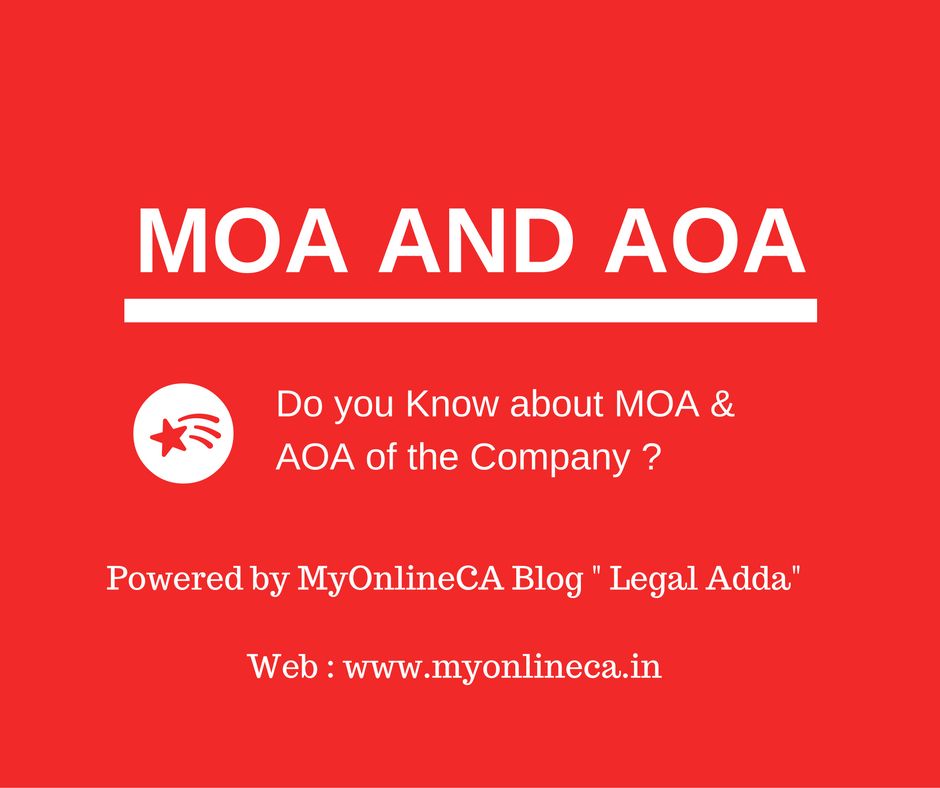 Importance of Memorandum of Association in a company

The Memorandum of Association is the company’s sanction that oversees the relationship between the company and the outside. MOA characterizes the objects of your organization or company. It basically is an archive that diagrams the degree inside which your business can work. As such it characterizes the parameters of your company. It remains for update of partner and required to draft as a major aspect of joining customs. It is one of the records required to join an company in India and states the accompanying:

Above all – the object or purpose for which the company has been framed. It is a supreme document of the company.

In principle, the company can just work in the ranges said in the articles provision, yet by and by the condition is attracted to cover as wide a territory as could be allowed. On the off chance that a specific business territory has not been secured in the item statement of the MoA and might be fancied at a later date, it can be included the Memorandum when needed. On the off chance that required a 75% of the members from the company can change the articles at whatever point they like. By and by, it merits remembering that executives of the company will bring about individual obligation if the company participates in a kind of business which is not approved by the items condition.

The MoA has to be draft with at most care so that there will be no chance so that company and its members can go against it. The Article of Association of company has to abide MoA as well. For an instance if one has mentioned business of export/ import in their MoA than they cant go for any other business under the same company.

Importance of Article of Association in a company

An company is a joined body. So there ought to be some principles and directions are to be framed for the administration of its inward issues and lead of its business and additionally the connection between the members and the company. Besides the rights and obligations of its members and the company are to be recorded. There comes the need and source of Articles of Association. The Articles of Association is a report that contains the purpose or reason for the company and in addition the obligations and responsibilities of its members characterized and recorded plainly. It is a vital record which should be documented with the Registrar of companies.

In the Table A of Schedule 1 of the Companies Act, 1956 is given a model directions for the administration of the company limited by shares. All or any of the controls contained in Table A might be received by an company restricted by shares. An article of Association is a document which all companies ought to get ready.

The AoA is an imperative contract document setting down controls overseeing the management of the organization including data with respect to general gatherings, top managerial staff, procedures by the Board and subtle elements on voting rights. The important areas from the Companies Act, 2013 that refers to the AoA are sections 5, 6, 10, 14 and 15.

It might likewise be noticed that area 6 of the Companies Act (Section 9 of the old Act) gives that the procurements of the Companies Act should supersede the procurements of the Memorandum of Association and AoA of the organization. While that is thus, it is likewise important to highlight that in the renowned World Phone India Pvt Ltd. case heard in the Delhi High Court, it was held that provisions in the Shareholders understanding can’t be upheld if the same are truant in the AoA. Organizations likewise take note of that while this may not be a warning issue , this would shape a portion of domestic issues that would should be sorted before a speculator hopes to pool in his assets. constrained) with insights in regards to speculator and promoter confinements, right of first refusal and co-deal rights.

Hope this article helpful for you regarding the Importance of MOA and AOA of Private Limited Company in India.