Since India bans foreign direct investment (FDI) in online retail, Flipkart has devised a complicated maze of many inter-connected and some purportedly independent entities that receive the massive amounts of money it raises to build an integrated e-commerce business. 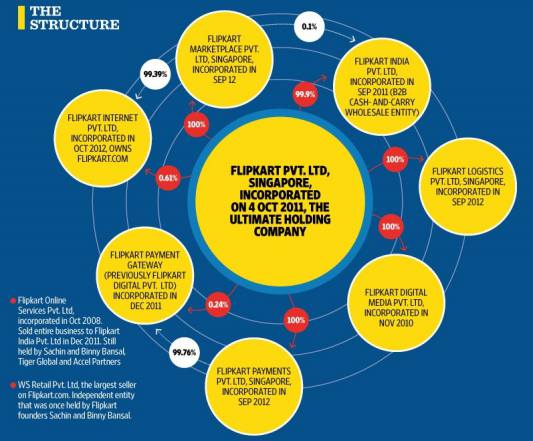 This is in short what Flipkart does

Recommendation : Why Flipkart Registered in Singapore

Then there’s WS Retail, one of the most important pieces of the Flipkart puzzle. WS Retail was owned by Flipkart co-founders until September 2012. The Bansals and two of their relatives were also board members at WS Retail. In September 2012, Flipkart was forced to sell a large stake in WS Retail to former OnMobile Global Ltd chief operating officer Rajeev Kuchhal, just weeks before Indian regulatory agencies launched an investigation into the company’s business relationship with WS Retail.Both the Bansals and their relatives gave up their board seats, too. Tapas Rudrapatna andSujeet Kumar control 46% of WS Retail, documents with the Registrar of Companies show. Rudrapatna and Kumar were employed by Flipkart at least until September 2012.

WS Retail still accounts for more than 75% of Flipkart’s business, according to three other people familiar with the matter. WS Retail and Flipkart used to share offices until recently and continue to share at least one warehouse location in Bengaluru, though both companies have different spaces in the warehouse, one of the people cited above said.After seeing such a complex structure, It has made us think more on the Taxation part of Flipkart. It has made us simple to review the Taxation applicable but also complex. Some major taxations which would be applicable are: