Resignation of Director in a Company 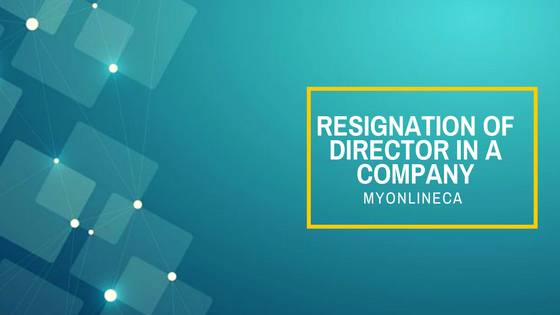 In this article, we look at the procedure for such resignation of Director.

Director’s notice of resignation to the company

A Director may resign from a company by giving a notice in writing to the company and the Board is required to intimate the ROC of such notice within 30 days in Form DIR-12.

The resignation letter that a director will submit for resignation should be in the following format given below :

Subject: Resignation from the Office of Director of the Company

I hereby tender my resignation from the office of the Director of the Company Name Private Limited with immediate effect or resignation date and request that a notice of my resignation letter is notified to the Registrar of Companies and the Board of Directors to have full information regarding this at the next Board Meeting.

I thank the Board of Director for having given me the opportunity and assistance to discharge my duties during my tenure as Director of the Company.

I request you to please provide me with an acknowledgement of receipt of the resignation and a copy of the e-Form DIR-12 filed with the Registrar of Companies to that effect for my reference and record.

Recommend Read : How to Become a Director in a Company

Liability of Director after the resignation

After a Director has produced his/her resignation and the Board has agreed to the resignation, the Director cannot be held answerable for liabilities incurred by the company after the date of acceptance of resignation. nevertheless, a Director who has resigned will be held liable after his/her resignation for any offences that might have occurred during the tenure as Director of the Company.The Resigning Director is only liable for any non-compliance during his tenure as director and not for anything after his resignation.

Procedure to fill the Dir 11 form :

It is always a difficult decision to resign as a director of a company, you have to take this decision by keeping in many important factors like life sustainability and what you will do for a living after you resign. If you are planning to resign from a company as a Director then think carefully before doing it as you might regret the decision afterwards. Also when you resign you need to make sure that you do it very professionally, remain productive till your last day at work, leave on a positive note, hold the necessary meeting and fulfil all your corporate responsibilities effectively and efficiently.