Private security agency is silently protecting our society when government agencies and mechanisms put by them fail to do so. Private security guards are present almost everywhere these days from malls, societies to companies and schools. There’s no place which could function without a security guard, the rapid increase is often due to the increasing crime in the society.In this,  article we will tell you procedure and steps to get Private Security Agency License in India. 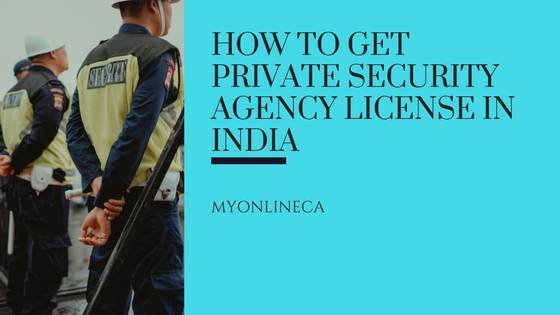 How to get private security agency license

Private security agencies are those organizations involved in providing security services including training of security guards to any industrial or business undertaking or a company or any other person or property. The Formation and Running of a private security agency, in India Falls under the Domain of  The Private Security Agencies Regulation Act, 2005.

The Private Security Agencies Act, 2005 regulates all aspects of the operation of private security agency business in India. The Act extends to the whole of India except the State of Jammu and Kashmir and is in existence since June 2005.The main purpose of the Private Security Agencies Act is to standardize the rights and duties of private security agencies and other issues in connection therewith.

The act is a state-specific act and gives power to  State Government to make rules for carrying out the provisions of this Act. Therefore, many of the States have implemented Private Security Agencies Rules to effectively discharge the responsibilities of the State Government under the Act.The Controlling Authority for the State is responsible for the issuance of private security agency license, renewal and regulation of the operation of private security agencies.The Act empowers the Central Government to appoint an officer of the Home Department equivalent to the Joint Secretary of the State to act as the Controlling authority. A person with similar rank shall also be appointed by the Government.

The companies which are based in India or whose majority shareholders are Indian nationals are eligible for security agency license. In addition to the above condition, Some category of people are eligible for obtaining a license for a private security company which is:

An application for acquiring a license for private security agency shall be made to the Controlling Authority of the concerned state along with a specific form which has to be filled for this purpose.The applicant shall submit an affidavit incorporating the details as mentioned by the authority in the concerned state, it includes information like name, proof of address, experience, policies and procedures, certificate or document that provides evidence that no criminal case is filed against you and other eligible documents.

On receipt of an application, the Controlling Authority may refuse to grant a license if the information furnished by you is found not to be satisfactory and may grant a license if it satisfactory after verification. The license is granted in a period of sixty days from the date of receipt of application.After  Controlling Authority grants the license then your agency is required to commence operations within six months of obtaining the license.

If you require any help in any legal matter like business registration then you can look up to MyOnlineCA, As we provide legal services anywhere in India at your fingertips.So Do Visit us Today !