Pan Card is Mandatory for all banks accounts except under PMJDY 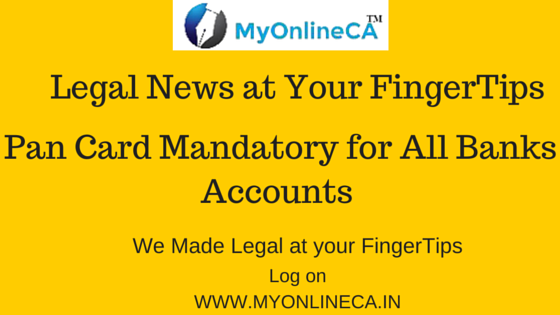 In keeping with the government’s thrust on financial inclusion, opening of a no-frills bank account such as a Jan Dhan account will not require PAN. Other than that, the requirement of PAN applies to opening of all bank accounts including in co-operative banks.

“The government is committed to curbing the circulation of black money and widening of tax base,” Adhia said. “To collect information on certain types of transactions from third parties in a non-intrusive manner, the Income-Tax Rules require quoting of PAN where the transactions exceed a specified limit.”

In a run up to the formal launch of this scheme, the Prime Minister personally mailed to Chairmans of all PSU banks to gear up for the gigantic task of enrolling over 7.5 crore (75 million) households and to open their accounts. In this email he categorically declared that a bank account for each household was a “national priority”.

The scheme has been started with a target to provide ‘universal and clear access to banking facilities’ starting with “Basic Banking Accounts” with overdraft facility of Rs.5000 after six months and RuPay Debit card with inbuilt accident insurance cover of Rs. 1 lakh and RuPay Kisan Card. In next phase, micro insurance & pension etc. will also be added.

1. Account holders will be provided zero-balance bank account with RuPay debit card, in addition to accidental insurance cover of Rs 1 lakh(to be given by ‘HDFC Ergo’).

2. Those who open accounts by January 26, 2015 over and above the 1 lakh Rupees accident claim will also be given life insurance cover of Rupees 30,000(to be given by LIC).

3. After Six months of opening of the bank account, holders can avail 5,000 Rupees overdraft from the bank.

4. With the introduction of new technology introduced by National Payments Corporation of India (NPCI), a person can transfer funds, check balance through a normal phone which was earlier limited only to smart phones so far.

5. Mobile banking for the poor would be available through National Unified USSD Platform (NUUP) for which all banks and mobile companies have come together.