List of Reasons for Doing Business in India easily 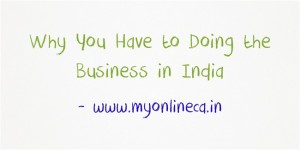 List of Reasons for Doing Business in India Easily

It has always been a debate among the Global business lobby about their expansion plans in India. There have ups and downs, phases of political instability and retrospective amendments and other reasons. Things have changed since the stable Government was formed in 2014 and this is well justified by the foreign investors confidence in Indian economy and influx of Foreign Direct Investment into India. We at KLC & Co. provide a list of Advantages to Register a Business in India or Invest into India, which may help foreign investor calculate the global positioning of India as a favourable destination to invest. So We Explain you some Reasons which which is helpful for Doing the Business in India.