Authorised Capital vs Paid Up Capital

Whenever there is a talk of any company by any individual or a subject matter expert etc, you must have heard terms like authorised capital and paid up capital of a company. Some of you must be familiar with these terms and what is their meaning. But if you are not familiar with these terms in this article we will explain you in details about Authorised Capital Vs Paid up Capital. 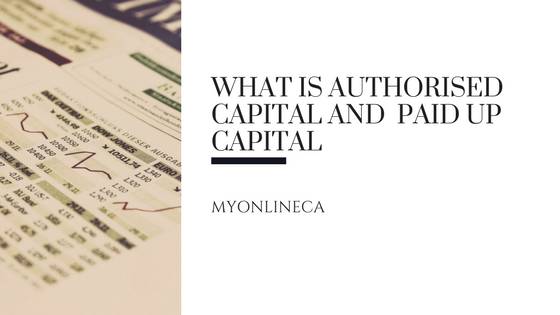 In this, the article we will provide you much-needed information regarding authorised capital and paid Up capital.

What Is Authorised Capital?

Features of an Authorised Capital.

What is Paid Up Capital

Tip : Do you know that now in the Private Limited Company Registration you have not required the minimum 1 lakh rupees capital. so its mean you can start your own company with any amount of the capital. even there are some other rules also changed in the companies act 2013 regarding the registered office of the company.

Authorised Capital Vs Paid Up Capital

We hope that we must have done a successful job in providing information related to Authorised and Paid-up capital. But still, you have any doubt or queries or want any legal help regarding any issue related to your company do check out our Company Registration Services and website at MyOnlineCa.