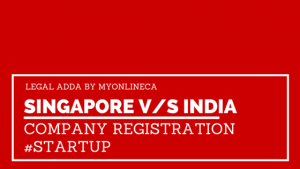 So, first of all, explain you some advantages for the Singapore Country:-

Now Explain a Full Comparison Between India and Singapore Company Registration and Doing the Business.

So This is Comparison Chart which is prepared by Guidemesingapouredotcom and Give Overview India and Singapore Business Advantages.

So as Summery Main 4 Reason Why Singapore is the best ?

Dividends distributed by the Indian Subsidiary to the Singapore Holding is not subjected to withholding tax in India. But India does levy a dividend distribution tax at 16.22%.

If qualifying conditions are met, the dividend received from the Indian Subsidiary can be exempted from tax under Singapore’s foreign-sourced income exemption scheme. This exemption apply only when the headline corporate tax rate in the foreign country from which the income (which is India in this case) is received is at least 15%, and the income had already been subjected to tax in that particular country.

According to the DTA, the interest income is taxed at a rate of 15% in the country in which the income arises. A similar tax may be levied in the recipient country as well.

Taxation on Royalties and Fees for Technical Services

Similar provision to the tax on interest income, though the rate is fixed at 10% only.

If India sourced income of a Singapore company is subjected to taxation twice (once in India and then again in Singapore on remittance), then the Singapore company can claim relief under the Foreign Tax Credit (FTC) scheme, which allows the company to claim a credit for the tax paid in India against the Singapore tax that is payable on the same income. The claim is called Double Tax Relief (DTR).